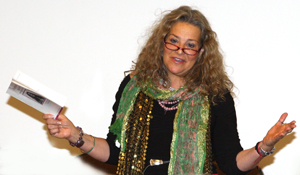 Judyth is the recipient of grants from the Witter Bynner Poetry Foundation, the McCune Foundation, and New Mexico Endowment for the Humanities. She served for many years as the Literature Coordinator for the New Mexico State Arts Division, while creating, owning and operating Santa Fe’s premier gourmet bakery, The Chocolate Maven, where she was as known as much for her brownies as for her poetry.

Her published books of poetry include Baker’s Baedeker, The Goddess Cafe, Hardwired For Love, Presence of Angels, Men Need Space, Dazzling Wobble, and Black Hollyhock, First Light. Her poems are included in numerous anthologies. She is the author of the internationally acclaimed poem, Wage Peace, which has been set to music and recorded by the Cincinnati Women’s Choir.

Judyth authored the cookbook for the celebrated Santa Fe, NM restaurant, Geronimo, published by Ten Speed Press. She is a noted food writer and journalist; and was the Santa Fe restaurant critic for the Albuquerque Journal for nine years. Judyth was described by the St. Helena Examiner as, "Energy with skin,” and by the Denver Post as, “A tigress with a pen”. And yes, she still bakes…for friends…shhhhhhhhhhhhhhhhhhhhhh.